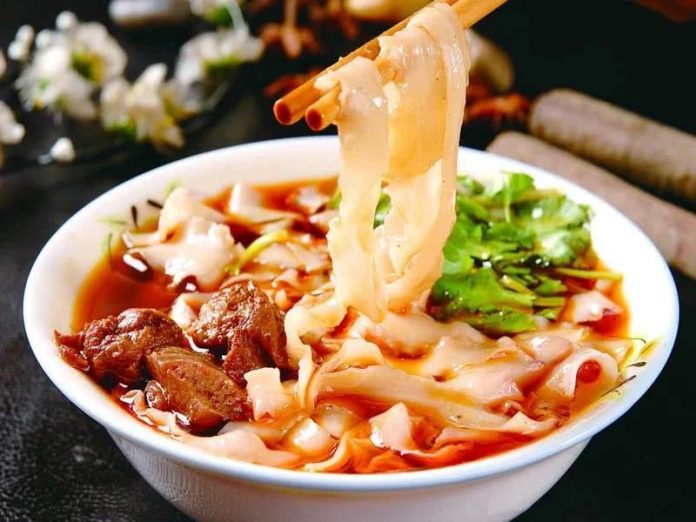 Unlike other dishes, Chinese like to put a place name in front of different types of pasta, highlight the characteristics. Over time, these pasta dishes have been used as local food endorsements, so that when you go to the local area, you must order one to show “authentic”.

Therefore, in the past two years, Datong’s Daoxiao Noodles have also appeared in large and small markets and stations everywhere. However, if you go to Shanxi, you will find that the Shanxi people can do more than Daoxiao Noodles!

In Taiyuan, it’s a pity if you haven’t eaten Dalu Noodles. For the Dalu Noodles, it is the spoonful of braised pork, tomato sauce, meat sauce … Various sauces made various Dalu Noodles.

What is Tijian? You can understand it by looking at the following picture.

Tick the noodles into the pan and boil them, very fast. The ends of the tip are long and slender, the middle part is slightly thick, white and smooth, soft and ribbed. After cooking, add sauces and mix well, it’s sleek and delicious.

The prepared noodles are mixed with the vegetables, the fragrance is full, and the authentic Shanxi Men Noodles must be rolled by hand instead of machine noodles.

It is probably one of the oldest machine noodles.

Helao Noodles are inseparable from the “Helao Bed” which is usually a piston-like design, uniformly distributed round holes at the lower end, the good dough is stuffed in from above, then squeezed hard, noodles pass through the small hole below and fall into the pot, so that a bowl of uniform thickness noodles is ready.

Min Tadpole is another type of pasta standing on the opposite side of the standardization of Helao.

The short “tadpoles” are one or two centimeters and only long ones are four or five centimeters, which is why they are so named. Tadpole bed is a special tool for making tadpoles, which is actually a piece of iron with round holes.

When making tadpoles, place the dough on it, and then push down to force the noodles into the pot through the small holes. If you want to eat tadpoles of different thicknesses, you only need to replace the tadpole bed with different specifications.

“One plate of over-oiled meat, two bowls of white noodles, dripped with pesto vinegar, over live gods.” If you are not from Shanxi, it may be difficult to understand Shanxi people’s love for oily meat.

Maybe you have a question: isn’t oily meat noodles in Xinjiang? Yes, but Xinjiang is lamb, and Shanxi is pork.

Although the birthplace of the big plate chicken is Xinjiang, after being improved by the Yuncheng people who love to eat, it integrates the unique taste of the locals in Yuncheng and has made a delicious big plate chicken. Fresh! Fragrant! Hot! Tasteful!

This pasta gets its name because it curls like cat ears. A skilled Shanxi housewife grabbed a small piece of dough and twisted it gently with her thumb to curl it into the shape of a cat’s ear.

Because of its small size, cat ears are more refreshing and easy to eat than noodles, and they are also more flexible to eat and can be cooked or fried.

Follow the Fen River to the north, reach the Xinzhou and Datong area, where large pieces of oats are planted.

The flour ground with oatmeal is coarse grains with a coarser texture than wheat flour. People in the north of Shanxi patiently rolled the oatmeal in a round cylinder, then carefully cooked them in a cage and steamed them, inventing the unique way of eating “Kaolaolao”.

If it’s the Spring Festival and the feast, you will also see a variety of date steamed buns and flower steamed buns. Under a pair of working hands, the ordinary dough was made into a variety of patterns, rejoicing and comforting.

After reading the above recommendation, which of the above pasta dishes do you like best?

Facebook
Twitter
Pinterest
WhatsApp
Previous article5 Dead and 1 Injured, Pessimistic Man Killing his Mother-in-law, Wife, and 3 Children
Next article27-year-old Landlady Has 400 Buildings with a Monthly Income of 200 Million, She Responds

Pupils from a rural elementary school in Fuyang, Anhui Province dumped nutritious meals in the trash because of poor taste. Some parents...
Read more
Food