Rabbit SaysChina News Network
Home Health Coronavirus The Most Complete Food on Board! Many Airlines Resume the Hot Supply
HealthCoronavirusFeaturedFood 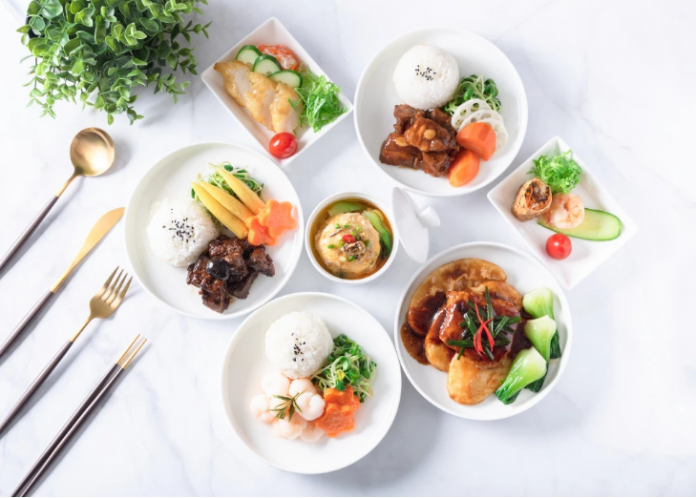 After the domestic epidemic is basically under control, many airlines have resumed the supply of hot food on board.

On August 3, many airline companies, including Juneyao Airlines, Eastern Airlines, China Southern Airlines, Air China, Xiamen Airlines, and Hainan Airlines, have successively resumed the supply of hot food on board.

According to the official website of the Civil Aviation Administration of China, since February, the year-on-year growth rate of passenger transportation in the civil aviation industry has rebounded month by month. In June, passenger travel demand increased significantly compared with the previous period, and the flight recovery situation continued to improve. The industry guaranteed a total of 325,000 flights of various types, with an average of 10,820 flights per day, an average increase of 14.1% from the previous month; a total of 30.739 million passengers were transported. The growth rate rebounded by 10.2 percentage points from the previous month, and the year-on-year growth rate increased by 42.1 percentage points from February. From July 1 to July 23, the passenger traffic volume was 26.427 million, recovery of more than 60% year-on-year.

Will resume hot food service on flights in mid-August

Juneyao Airlines told the reporter that it will resume hot food service on flights in mid-August, and the new air menu will be unveiled at the same time.

Juneyao Airlines completed the confirmation of the restoration of diversified meals on board in July, and plans to resume diversified meals and various onboard beverages on all domestic routes from mid-August, including the “Ruyi Trilogy” new business class flight meals and hot meals in the newly designed economy class.

Juneyao Airlines recently announced the summer passenger load factor data, showing that the air transport market continues to pick up. In July, passenger transport volume exceeded 1.1 million, which is close to 80% of the same period last year. According to statistics, Juneyao Airlines has carried out nearly 8,000 flights in July, and the overall passenger load factor has returned to nearly 90% before the epidemic.

Juneyao Airlines launched the “Unlimited Upgrade Card” value-added service product on July 10. According to the reporter’s understanding, as of July 31, nearly 13,000 passengers have successfully completed their upgrades. Popular destinations for upgrades are mainly concentrated in Shenzhen, Chengdu, Sanya, and other 787 wide-body flight destinations and popular tourist cities.

At the same time, following the good response from the Xiamen-Shanghai short-haul hot food pilot, China Eastern Airlines further expanded the range of hot foodservice short-haul routes. From August 1st, it will provide Hunan specialties for passengers on the Changsha-Shanghai flight. The meals include Mao’s braised pork, Dong’an chicken, spicy chicken, and other classic Hunan dishes. In the future, hot food services will also be launched in the two cabins of the Nanjing-Beijing line.

In the next step, China Eastern Airlines will gradually expand the range of hot foodservice routes in accordance with the development trend of domestic and foreign epidemics and epidemic prevention requirements. It is expected that from August 16th, all domestic flights will resume hot food equipment.

Starting from July 15th, some flights have resumed catering services.

From July 15th, China Southern Airlines has restored the catering service standards on some domestic flights and in the Pearl Lounge.

Starting from August 1st, it will restore the standard of meals for domestic flights in batches.

Air China stated that it will restore the standard for domestic flights in batches from August 1. Among them, flights between Beijing, Chengdu, Hangzhou, Chongqing, Tianjin, Shanghai, and Wuhan will be the first to resume hot food supply, and other domestic flights will also resume.

After the resumption of hot food on board, Air China will provide two hot food options for passengers who choose to travel in two cabins. Hot foods such as canned tomato sirloin, mushroom chicken clay pot rice, Sichuan-flavored crayfish will return to the flight with appetizers Mixed dishes, trendy desserts, fresh fruits, and other meals.

Among them, after the business class meals are revised and upgraded, the model of “three dishes and one soup” will replace cold meat, cold dishes or high-sugar, and high-fat desserts. In the new breakfast service, passengers can choose warm white porridge or multigrain porridge with fresh egg dishes, vegetables, and seasonal fruits; or choose fried noodles that are also hot dishes, with Chinese dim sum, crispy fritters, and fresh fruits.

On flights with an actual flight time of more than 100 minutes, you can enjoy a revised and upgraded business class dinner. On short-haul flights with flight durations ranging from 80 to 100 minutes, Hainan Airlines has designed dishes with special fried rice, accompanied by seasonal fresh fruits. Even on non-meal flights, passengers can still enjoy the combination of hot sweet soup, hot Chinese desserts, and fresh fruits.

The economy class has also improved the quality of meals. On the basis of continuing to prevent and control the epidemic, Hainan Airlines has added additional types of hot food in economy class to flights with flight durations of more than 90 minutes. For dinner, you can choose rice or noodles as the main food, with dishes with regional characteristics; for breakfast, you can choose fried noodles with Chinese dim sum, or a combination of fried rice and braised eggs.

Starting from July 25th, Xiamen Airlines has fully restored the on-board catering service standards on domestic, regional and some international routes. Not only will passengers in all cabins enjoy hot meals, but also the pre-departure meal selection service will resume.

According to the latest service standards, the economy class will be restored from the unified streamlined packaged snacks during the epidemic period to the service standards for dinner and snacks. The hot food on domestic routes is equipped with preserved clay pot rice and braised eggs. The two-cabin service will also resume ceramic tableware, tray meals, and a variety of high-standard catering services such as drinks and beverages. For routes longer than 120 minutes, two-cabin dinners will provide three hot food options.

In addition, pre-departure meal selection services will also be resumed simultaneously. Passengers can use Xiamen Airlines’ official website, APP, and other channels to make online meal selection, special meal reservations, or Xiamen Airlines healthy light meals for high-end passengers in advance according to their needs.

In addition, in order to effectively enhance the short-route meal experience, Xiamen Airlines has developed a new type of meal based on passenger needs—all-day brunch, which will be launched in Xiamen Airlines’ short-route first and business class starting on August 16. Passengers can enjoy the new pocket sandwich developed by Xiamen Airlines Egret Air Kitchen, which is paired with a variety of fresh-cut fruits, yogurt, and nuts.

Pupils from a rural elementary school in Fuyang, Anhui Province dumped nutritious meals in the trash because of poor taste. Some parents...
Read more
Food