The Most Amazing Square Dance, They Gather Despite the Seriousness of Epidemic 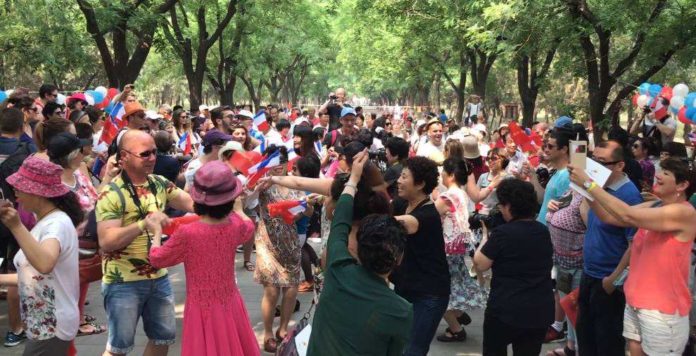 During such a tense moment, there was a group of people who ignored the call of the country, gathered together to perform a square dance, and played Tai Chi. At home and abroad, we were convinced by this “mysterious oriental power“!

Do you think the Wuhan Fangcang Hospital was lamenting and sullen? As we know, people there could have their own fun.

I don’t know who was the first to take the lead and started a small range of dance activities by the bed.

This jump was incredible, and the “dancing souls” of many aunts who had been restricted from outdoor activities since New Year’s Eve were burning.

More and more square dance sisters joined in, changing the dreary and worrying atmosphere in the ward.

Come on, put on a mask and shake your cheekbones and elbows, and stop worrying about this fucking disease!

While the aunts “dancing miracles”, the uncles are also high and twisted directly into the middle of the dance floor. Brothers dance, how can there be obstacles on this “Disco” line!

In this special period, it is the only place in the country where people can gather legally.

The uncles and aunts did not humiliate their mission, and they danced together in the courtyard. The scene was a bit out of control.

The medical staff who originally led the dance can no longer occupy the C position, and can only act like fans and cheering fans.

It is estimated that the virus is helpless. It took so much effort to prevent you from entering the square to “occupy land as the king.”

As a result, you can still be “arrogant” in the hospital.

Later, the simple square dance could no longer meet the spiritual needs of this group of over-aged children. They began to seek medical care to learn dance in various places.

Ha Guli Toleheng from Xinjiang, in addition to the doctor is also the title “Fangcang Hospital Dance Teacher“. She wears heavy protective clothing and teaches their local dance “black horses”.

In addition to the black horses in Xinjiang, the dancers of the Fangcang Hospital also followed the doctors in Hainan to learn the tune of “Zhuozhou 9:30”.

It doesn’t matter if you are not good at singing and dancing, there are many martial arts radios in the cabin to choose from.

When the “Song of Health” sounded, everyone would be lovely to make radio gymnastics.

Through these activities, many people also put down their nervousness, truly integrated into this community life, and became each other’s most solid comrade.

There are even some enthusiastic uncles and aunts who have begun to date each other for single youth at home.

They agreed that they would “schedule immediately” after discharge.

Such an optimistic mentality, who looks up, are all good seedlings of koi.

The disease is not terrible, the terrible thing is that you give up hope of life.

In the Fangcang Hospital, everyone really felt the sentence: the wind can blow out the candles, but the mountain fire is getting more and more powerful.

The Fangcang Hospital seems to have forgotten its status as a serious hospital, just as the people living here have ignored the fact that they are ill.

One of the patients was really bored. He pushed the trolley and learned the train attendant.

Being able to hear hearty laughter in the ward is a rare thing.

At Fangcang Hospital, doctors not only have to be doctors, but also literary and artistic committee members and health care committee members. After a series of activities, what they have gained is the patients’ laughter and psychological relief.

They are also assimilated by patients in high-pressure work.

As we all know, during the epidemic, doctors had to put on thick protective clothing, and it was their habit to write their names on the back.

But the doctors behind the Fangcang Hospital wrote Zhouheiya and hot noodles.

No other reason, just want to eat.

There are exceptions, such as “Wife of Ge Hu”.

Even Hu Ge himself stood up and made an official announcement.

This momentum, I am afraid that the devil is afraid to do it easily.

In addition to those who move, there is still a group of people who is calm.

Earlier, on the day the Wuhan Fangcang Hospital was put into use, a man quietly reading a book in a hospital bed was quickly recorded by the media, and was affectionately called “Qingliu Brother” by netizens.

Many internet friends asked: What book is in his hand? Then followed the “m” on his cover and began his journey of inquiry.

It turned out that the book was “The Origin of the Political Order: From the Pre-Human Age to the French Revolution” by American scholar Francis Fukuyama.

Interestingly, Francis Fukuyama tweeted the news on his own Twitter after learning about it.

There is a junior student studying English for postgraduate entrance examination while healing.

He said his wish was to be admitted to Wuhan University.

The start of 2020 was unexpected for each of us. But when we saw them in the hospital, many people became very warm and felt healed.

Some people are really practicing that sentence: The real heroism is that after seeing life clearly, he still loves life.

But because of this epidemic, they gathered together in the dust and in the pain.

But they have one belief in each other: the epidemic will eventually pass; spring will come soon.

The optimism and tenacity in their bones, through the layers of haze, shone with a romantic shimmer. Although the shimmer is small, when they come together, the sky is bright.

Although this winter is a bit long, some are difficult, and some are cold. But these little ones, warming our hearts little by little, light up the night little by little. There will be tomorrow, and when you wake up, it is the picture above.

From plate making, material cutting to completion, they are all hidden in a remote residential house in the county seat. Leather and...
Read more
Business