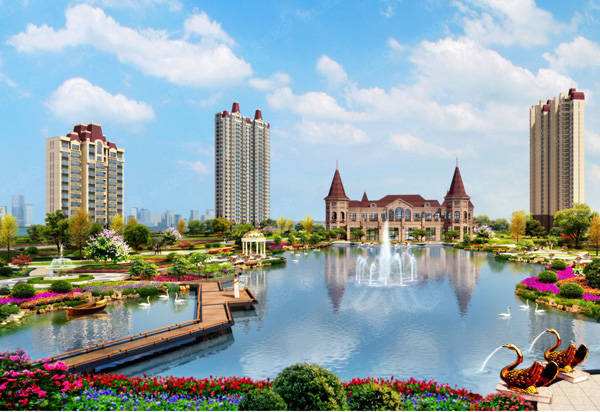 In the past few days, Evergrande hit a beautiful set of boxing punches and got the limelight.

First, on February 13, Evergrande introduced an 88-day lock-in purchase policy. Buyers fancy a certain source of suites in Evergrande. They only need to pay a 5000 yuan deposit online on the “Hengfangtong” platform and sign the “Commercial Housing Online Subscription” to book a listing.

Customers who sign an online subscription book and lock a set of properties for 5,000 yuan enjoy too many benefits:

This series of reward clauses have caused many people to be dazzled by happiness and shouted that the opportunity for taking advantage is coming!

Is Boss Xu’s wool so easy to get?

Secondly, Helping Evergrande to sell a house for 1 point plus 10,000, it sounds a lot. In fact, if a developer uses a secondary distribution agency to sell a house, a set of commissions starts from at least 3 points. Such a comparison, national marketing is really too cost-effective.

Thirdly, the locked house was bought by others first, and the compensation was 5,000. Many people want this benefit.

But in fact, once the listing at the sales office is locked, it will not be released again unless it is difficult to find a house for sale. If you want to earn 5,000 yuan, it will be quite difficult.

Finally, before May 10th, if this house was not bought by others and you did not buy it, 5000 yuan will be returned to you.

It sounds like money can be withdrawn, not bad! However, if the money is not refunded, will you make a decision? Most people are rushing to fleece the wool, not to buy a house. Moreover, this 5000 yuan was turned over by Evergrande for 88 days with no interest.

On February 16th, Xuefei Liu, vice president of Evergrande Group, announced at a press conference that since the “online purchase of houses” on February 13, various sales data have shown explosive growth, and customers subscribed for 47540 houses.

I figured it out, there were 47,540 units with a subscription of 5,000 yuan each, and the total subscription money reached 237.7 million yuan, with interest-free use for three months.

What is the current cost of issuing debt to Evergrande?

In other words, Evergrande’s recent borrowing cost is 12%.

Of course, the 6.87 million is just a little for Evergrande, but since it’s free, why not use it?

Besides, Evergrande’s massive operation, the subscription is only an appetizer, the really good show is behind.

On the afternoon of Feb. 16th, the huge preferential red-headed documents issued by Jiayin Xu were circulating on the Internet.

From February 18 to February 29, 2020, Evergrande’s residential properties (including apartments and office buildings) for sale can enjoy a 25% discount.

On the basis of the 25% discount, Evergrande has also superimposed a series of dazzling discounts, 7% off, one-time payment, a single building with a removal rate of 80% or more, and an additional 3% discount, etc. It is said that the minimum can reach 64%.

If this type of jump-off discount is selling health products and god oil, I believe, if it is selling a house, it would be incredible.

Evergrande worked hard for a year, earning 12% of its profits, and boss Xu made a big splash, giving 25% of the profit and 13% of the net loss.

The account here is a bit wrong. The boss Xu is selling a house, not for charity.

Moving forward, we finally found out that Evergrande was the most passionate developer that enjoying discounts in China.

Evergrande’s discount routine is very similar. Release a bright discount first, then stack some other discounts, at last, check out without reason.

After a careful comparison, you will find that this discount activity is nothing new. It is a replica of Evergrande’s discount routine for many years. But this time, Evergrande’s old bottled new wine has achieved great success, thanks to four points:

First, the discount fell to a new low and became 25% off;

Third, add a plot, and a warm-up activity of 5,000 yuan locked in advance, making the process a twist and turn, more beautiful;

Fourth, spend a lot of money to make a large wave of promotion.

The most critical question is the average profit rate of 15 points in the real estate industry.

This aspect reflects Evergrande’s development strategy, focusing on the third and fourth lines, but not the first and second lines.

The cost of land acquisition in the first and second lines is high and the profit is low. There is basically no need to worry about losing money, which is conducive to improving brand reputation.

The third and fourth lines have high requirements for the project’s operational capacity and operating cycle. If the time node is met and the project is publicized, a project can make a huge profit; if the site is not selected properly or the timing is wrong, the mire will sink. The project has been sold for five or eight years but still has a lot of inventory.

In addition, there is considerable room for flexibility in the filing prices of the third and fourth-tier projects. In particular, the third and fourth-tier suburbs lack real estate for benchmarking projects, and the price is very arbitrary. You only need to report a relatively high filing price in the early stage. After the government approves it, you can make advances and retreats, discounts and concessions.

Evergrande has a lot of real estate on the third and fourth lines. The normal discount for visiting is very scary. The house with a registered price of 10,000 can be sold to you after being discounted by more than 8,000 or even less.

Seeing here, if there is still unwillingness, you must get Evergrande’s wool, saying that I do not buy a house in third and fourth cities, I buy a house in front and second cities. The front-line houses are clearly marked with real prices. The record price is under pressure from the government and can’t be overstated, the sales office can’t usually discount that.

Then you are really naive. Evergrande doesn’t pay attention to the first-tier cities, that’s not just fun. There is only one Evergrande in Beijing that has an end-sale for a total price of 30 million. Shenzhen has no Evergrande houses for sale, only a few apartments; Shanghai has no Evergrande properties for sale.

If you are still not willing to say that there are many second-tier cities, sorry, in the “No Reason to Check Out Agreement” published by Hengfangtong, there is a line of small characters hidden at the bottom, you can see with a magnifying glass: Some properties are not participating in the offer.

So, if you want to get boss Xu’s wool and buy a good house with a 25% discount in the first and second-tier cities, isn’t your brain broken?

Finally, I have to say something fair to Evergrande.

Although Evergrande’s discount activities have lasted for many years, various discounts are not new. However, the 25% discount this time is indeed the lowest discount in history. If the record price remains unchanged, it is indeed a great discount to give 3 points more than the previous lowest discount of 78%.

There are so many real estate projects in Evergrande across the country, especially those in the 3rd and 4th lines, and there are still houses worth buying.

For example, there is just one apartment in Shenzhen, Evergrande Fashion Valley, also participated in this event. This real estate is located in Longhua. The unit price is not high at only 30,000, and after the one-time 25% discount is only 22,200. The profit margin is very large. As far as I know, many of Evergrande’s internal employees have subscribed.

In January 2020, Evergrande achieved sales of 40.55 billion yuan, compared with the annual task of 650 billion, only 1/16 is completed. In February, the coronavirus epidemic broke out, and Evergrande’s stock fell all the way.

For Evergrande, running high-profile in advance is not only to strive to complete the annual sales task but also because companies like Evergrande rely heavily on high turnover and cash flow.

At present, Evergrande’s activities have been quite successful. During the quiet special period of the housing enterprises, Evergrande fired its first shot!

Although the profits have been diluted, it has earned enough attention, raised the stock price, cleared a number of third and fourth-tier houses, and won time and cash flow.

Pupils from a rural elementary school in Fuyang, Anhui Province dumped nutritious meals in the trash because of poor taste. Some parents...
Read more
Business

Putian people are everywhere, even on the plateau with an altitude of more than 4,000 meters, there are Putian people operating gas...
Read more
Food